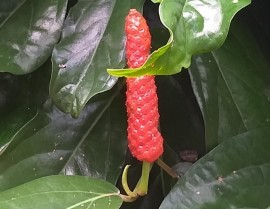 pepper vines climb up the trees 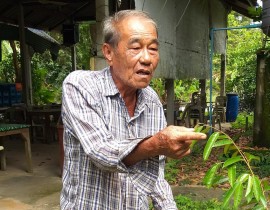 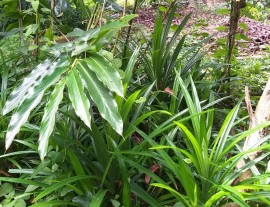 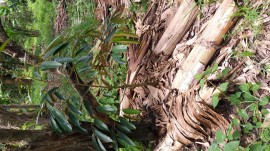 pepper vines climb up the trees

There are generally two reasons why Thai farmers embrace organics - one is health and the other is economics. For 73 year old Kumnung Chanthasit it was the latter. He had farmed the same plot of land in Tha Mai, Chanthaburi since boyhood. Despite the rich volcanic soil, he found himself sinking deeper and deeper into debt as he struggled to pay for the fertilisers and pesticides he thought he needed.

Finally, 26 years ago he was inspired to try a different path, that of the ″sufficiency economy″ as taught by Thailand's late King Bhumibol. In addition to advocating Buddhist values such as moderation and reasonableness, it proposed an integrated farming system that could support a family on just four acres and Kumnung had eight. Following these principles, he created a diverse garden of fruit trees, fishponds, herbs and chickens, while replacing the pesticides and fertilisers with composts and organic sprays made with his own herbs and fruit waste. His system is so successful he paid back his debts, earns enough to live comfortably with his children and grandchildren (he proudly shows off his new pickup truck) and he has become a well-respected teacher.

The first thing to notice at his place is the soil which is full of worms and humus. Ground cover is abundant, including massive clumps of pandanus and cardamom. These are companion plants to his fruit trees, increasing the biodiversity, encouraging microorganisms, and discouraging insect pests. Water for the gardens comes from fishponds which add to the nutrients in the soil. Meanwhile a flock of around 100 wild chickens, descendants of the indigenous Thai red jungle fowl, till the soil, keep insect pests at bay, and provide eggs. Incidentally he also uses the eggs to produce his own home-made hormone stimulant which encourages the fruiting and flowering of his trees.

The trees look vigorous and healthy, with dark green leaves, a testament to the richness of the soil. Kumnung's fruit forest includes durian, mangosteen, longkongs, rambutan, papayas and bananas. The tallest trees are the durian, apart from some giant coconut trees. One of the durian trees is 55-years old and produces 100-150 kilogrammes of fruit a year. Given today's high prices for durian that's over $3,000 for a single tree. Not bad at all! In the middle layer of the forest are longkongs and mangosteen and at ground level, herbs and a new generation of recently planted durian trees. As the trees grow up, they crowd out the sun loving bananas which are cut down and the stumps add fibre, microorganisms and potassium to the soil.

His principles include ones which are common to biodynamics and permaculture - limit disturbance to the soil, keep soil covered with plants, strive for diversity, and integrate animals into the system. He adds to this Buddhist teachings such as being in the present, patience, balance and moderation.

Recently he divided up the land among his three children. It is incredible that just eight acres can support so many people. What a great testament to the value of building up the soil and creating a dynamic ecosystem.