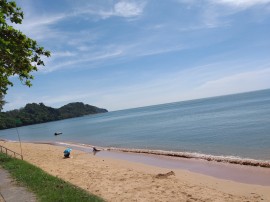 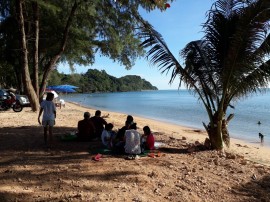 Picnicking at the beach 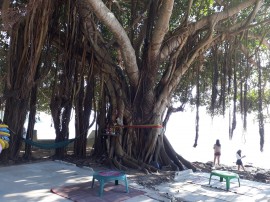 A bodhi tree by the beach

We first came to Kung Wiman 16 years ago. It was a beautiful but deserted little beach next to a road that twisted around the hills to a fishing village at the end of the peninsula. The beach faces west across the Gulf of Thailand and the sea goes as far as the eye can see before curving into the horizon.

An old sign by the beach explained that the name means a bay in heaven - so called because there was a shipwreck a long time ago and when the survivors swam to shore they thought they had gone to heaven.

Kung Wiman has been developed since we first came but in a good way. There are now little walkways and benches along the beach and outdoor eating places served by the restaurants across the road. No permanent structures are allowed to be built along the beachfront which is a refreshing change from other parts of Thailand.

It is really popular in the weekends when visitors come to admire the local scenery and eat fresh seafood from the local fishing fleet but it is often quiet during the week. It is a great place to watch the sunset as the sun sinks straight into the sea and once it gets dark the lights from the squid boats come out and twinkle on the horizon.

Swimming is not recommended in the monsoon season between May and October as the water is churned up and there is a nasty rip. But outside of this season it is clear and calm and when out in the sea there is a lovely view of the surrounding hills. The distinctive red rocks in some places along the beach appear to be volcanic and have given the sand a golden colour.

It is a ten minute walk along the road from Faasai Resort and Spa, or those who like adventure can scramble up the hill behind the resort to a path that leads down to the sea.

Picnicking at the beach

A bodhi tree by the beach