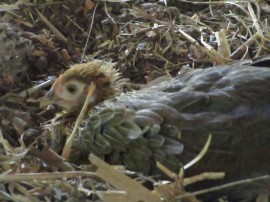 Valentina, happy in her mansion

Valentina with the rooster

Valentina the day she hatched

Eggs of the Thai red jungle fowl under the lemon grass.

Valentina, happy in her mansion

A few months ago wild chickens began visiting our farm at White Water Lake. They were beautiful but very shy Thai red jungle fowl, or gallus gallus. A male was accompanied by about six hens, which before too long began building nests. One went under a lemon grass bush and was quickly abandoned, while another in a tree blew off in the wind, leaving the eggs on the ground. The wisest hen built her nest high in the straw we keep for the cows and was safely able to sit on the eggs for the next five weeks. Finally her chicks hatched out on Valentine's Day; unfortunately she scrambled out in such a hurry she left one baby chick behind, which we rescued and raised.

The chick was very cute and vocal and became very friendly and affectionate. We named ″him″ Valentino but after two months we found out that ″he″ was a girl and changed her name to Valentina. When Valentina came into our lives we had already made plans for a chicken house to raise free-range eggs so this was quickly built. It was airy and spacious and snake proof and this became Valentina's mansion. She needed companions so our housekeeper Nit gave us two young birds of a similar age, which were also hybrids of red jungle fowl.

As for the origin of the birds in the village, which is close to Kung Wiman in Chanthaburi, about 10 years ago one of our neighbours acquired a pair of red jungle fowl which he bred. True to their wild natures, the young ones escaped and gradually spread through the village and into the hills. Unlike domesticated chickens, jungle fowl are very good flyers and Nit says the ones she raises often fly away when they grow up. Quite a few have escaped to the forest behind our house where hunters nabbed them, but there still seem to be plenty around including the ones that have moved into our farm.

Red jungle fowl from Southeast Asia are said to be the ancestors of modern domesticated chickens and are much the same as they have been for thousands of thousands of years. While having some similarities to domestic birds, they do have important differences. Apart from being good fliers, they are smaller and leaner and the features seem more like a pheasant than a chicken. The females only have rudimentry combs and hold their tails horizontally. Valentina fits these descriptions so perhaps she is close to being a pure breed. The male is just now getting a white tuft under his wattles which suggests he is quite close to the original variety too.

Red jungle fowl also grow slowly. Whereas battery hens are plump enough to be slaughtered at around two months, ours are still not mature at five months old. The male only just began his first tentative crowing this month which is a high squeaky sound, and thankfully not very loud. These birds also lay far fewer eggs a year - whereas a commercially bred chicken may lay more than 300 eggs a year, a red jungle fowl may only lay a couple of dozen.

Given the low rate of egg production of Thai chickens, it seems that Valentina won't have to be a working girl - but can enjoy her life as a beloved pet at Faasai and a beautiful reminder of Thailand's heritage.

Valentina with the rooster

Valentina the day she hatched

Eggs of the Thai red jungle fowl under the lemon grass.