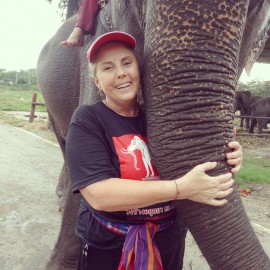 Jenny with one of her elephant friends 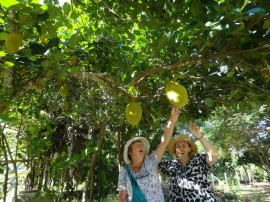 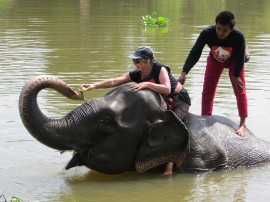 Swimming with the elephants at Elephant Stay

Feeding bananas to the cows at Faasai 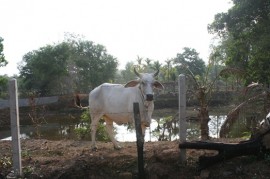 Jenny with one of her elephant friends

One of our favourite visitors at the resort is Jenny Dickens, an Australian zoo-worker who is a trained mahout. She comes to Thailand two or three times a year bringing small groups who tend elephants and learn about conservation before coming to Faasai Resort and Spa for some relaxation and pampering.

Jenny is always hugely welcome when she comes - she loves to try new things such as rice harvesting, eating durian and sampling wild food and she brings wonderful guests. Moreover she is a great animal lover and I enjoy swapping stories about cows and elephants.

Her most moving elephant story concerns Loong Sap, a 60 year old female who was Jenny's teacher when she was training to be a mahout. Loong Sap would rumble each morning when she saw Jenny, retrieve the mahout stick, the takaw, from wherever Jenny dropped it and she remembered Jenny and greeted her warmly after a two year absence.

My cows don't rumble but they moo and gallop madly round the lake when they see me drive past in our old truck. But rather than an affectionate caress with a trunk, as Jenny gets from her elephants, our cows threaten to head butt me if I don't give them their favourite treat of bananas.

Actually Jenny knows a lot about cows as well as elephants. She grew up on a dairy farm and, in return for doing the chores, her father would give her a bobby calf each year. She was supposed to sell them and pocket the money but, as the paddock gradually filled up with unsold bulls, her father realized he would have to change the incentive!

Clearly, Jenny was always an animal lover, but it wasn't until she had a brush with death in 1998 that she changed her life's path to focus on animals. After that she studied animal technology, trained seeing-eye dogs and even did medical research. Eventually she got a job working at the Melbourne Zoo and started bringing small groups to Thailand on bespoke tours she called Elephant Encounters.

Those joining the groups learn how to care for elephants at Elephant Stay in Ayutthaya, Thailand, visit the Elephant Research Centre in Kao Yai National Park and the Grand Palace in Bangkok, before coming to Faasai where we arrange various activities. These depend on the interests of the guests and time of year, and have included kayaking through the mangroves, visiting the gemstone markets, carving fruit, learning Thai cooking and helping out at our organic farm.

Jenny developed the concept for Elephant Encounters after training to be a mahout. She realized that it is an ancient tradition - ″Thai people have worked with elephants for more than 4,000 years″ and this needs to be preserved along with the elephants. As habitat disappears most elephants are now in captivity and need to be trained: ″You can't have 3-tonne children running around doing whatever they like!″ she says, and so the skills of the mahout are essential.

Elephants are a national icon for Thailand and their future survival depends on providing sanctuaries such as at Elephant Stay. Since the 1990s the number of elephants in Thailand has dropped from 20,000 to around 6,000 and there are precious few left in the wild. Those herds that remain, such as in our national parks in Khao Chamao in the neighbouring province of Rayong are at risk as they stray into farmers' fields looking for food.

The groups that come through Elephant Encounters are helping to support the upkeep of the elephants and keep important traditions alive. Elephants are very expensive to feed. Each one eats about 200 kilogrammes of food a day including fresh fruit, hay, plants, corn and sugar cane. A huge truckload of pineapple plants is brought to the centre every day to help feed the approximately 90 animals at the Elephant Stay sanctuary.

Swimming with the elephants at Elephant Stay

Feeding bananas to the cows at Faasai