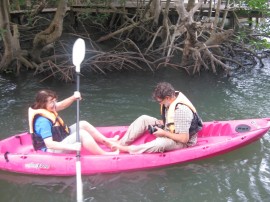 Kayaking through the mangroves - Bronwen paddling and Fred filming 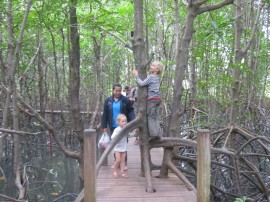 The children Martin and China in the mangroves 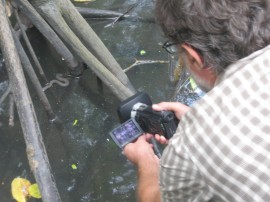 Filming wildlife in the mangroves - a snake! 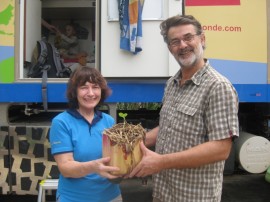 A visit from the magic bus

In February we had an inspiring visit from a family of roving film-makers - Fred Cebron, his wife Laure and their two children Martin and China who are traveling around the world in their magic bus. They are filming its beauty and meeting people who are working to preserve nature and do good things.

Their stop-off at Faasai was to find out about our local mangroves which protect the land, provide a haven for wildlife and a nursery for the sea. We took them to visit the Kung Kraben Bay Royal Development Study Centre and went kayaking through the mangroves. Scientists Thakorn Kakhaikitthawat and Krissana Chankaew explained to us about the project, which was established by His Majesty the King of Thailand in 1981. It is called a living natural museum where scientists work with the local people, tourists and local businesses to preserve nature and the ecosystem.

Mangroves and sea grass have been planted in the bay and various kinds of marine life are bred or rescued and released into the sea including tiger prawns, white shrimps, sea bass and grouper. One grand project has been the breeding and release of swimming crabs which are an important part of the food chain, with more than 20 million released so far! The sea grass provides food for dugongs, the rare and endangered sea cow. It must be successful as we were told there had been two visits in the past fortnight including a mother and calf.

Aside from preserving and nurturing nature, this important project also supports the local way of life in the loca fishing community as the seas are well-stocked with fish and other marine life in the food chain. They also work with shrimp farmers to help ensure their waste discharges are purified.

The project extends over an area of 13,090 hectares and takes in local villages. Faasai Resort and Spa, White Water Lake, Kung Wiman Bay and the forest covered hills that surround us are also part of it. So it is nice to know that our natural heritage which includes fresh water springs and rare fauna and flora is also protected in some way.

By the time the Cebron family visited us in February 2013 they had been traveling for three years, visiting many places in South America, Europe and Asia. After Thailand they planned to head for Malaysia and then after that, New Zealand.

Fred showed me some of his programmes from South America and Cambodia and they were brilliant. I loved the enthusiasm and dedication of the people they met on their travels and the beauty of the local scenery - not just landscapes - but imbued with the life of the local people. The films have a special perspective as the children are the main characters and so we see through their eyes. What a unique upbringing they are having, as their days are filled with rich and exotic adventures. The two children, Martin and China, are already very professional, knowing just what to do in front of the cameras. They have happy and out-going personalities - so this kind of life seems to be good for them.

Once complete, the series will be screened on France 5 TV and then later it will be released for global distribution. Some programmes can be seen on vimeo
and Martin on tour

We were very glad to be able to be included in this wonderful project and wish them all the best for the rest of their travels.

For those interested in learning more about the Kung Kraben project you can download a copy of the booklet here.

Kayaking through the mangroves - Bronwen paddling and Fred filming

The children Martin and China in the mangroves

Filming wildlife in the mangroves - a snake!