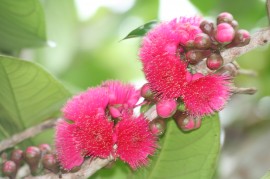 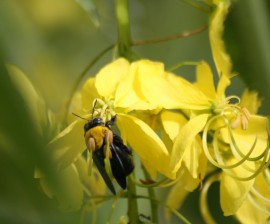 A bee at Faasai Resort 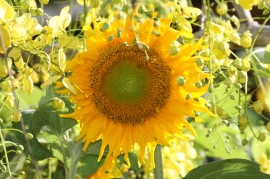 Practical Self-sufficiency in Thailand. Lessons from the Financial Crisis

Faced with a financial crisis both Greece and Thailand had a built-in resilience - a high level of land ownership, a thriving informal economy and a traditional village culture. These ties to the land provided the people with a lifeline when crisis struck in Thailand in 1997 and Greece in 2009 as people were able to escape from the city and go back to the countryside.

Although the Greek drama is still unfolding, the crisis in Thailand helped to seed a thriving permaculture movement, which received tremendous inspiration and support from the King of Thailand Bhumibol Adulyadej who developed the concept of the ″Sufficiency Economy″ which stressed the importance of economic independence and sustainability.

Thailand's sufficiency economy is based on three underlying principles: moderation, reasonableness, and adequate immunity (against unforeseen events or crises). Drawing on principles of Buddhism (the majority religion in Thailand) it follows the ″middle path″ by avoiding extremes such as self-deprivation or excessive consumption and it has been developed as a practical working model that can be applied at every level of society. Fifteen years after the crisis, the movement continues to gain momentum, and is the focus of the country's latest five year development plan, which began in 2012.

The popularity of the sufficiency movement in Thailand meant that Thai people also developed an interest in Japan's nature farming movement and in 1989 the Thailand government invited the Japanese organization Asia Pacific Natural Agricultural Network (APNAN) to establish a base in Thailand. This is a regional centre teaching natural farming methods based on effective microorganisms and disseminating knowledge of the techniques throughout the Asia Pacific.

The demonstration farm in Saraburi in the West of Thailand is a relatively poor agricultural area. During the hot summer months the surrounding plains scorch in the dusty heat, however the APNAN centre has become a fertile oasis that produces large quantities of organic produce while providing training and knowledge to millions of Thai people. The Thai army has been an important source of information dissemination and stories from self-sufficient farmers regularly feature on local television.

Although courses for Thai people are held year-round, the centre only holds two courses for international participants each year and I attended one in February 2010. About 50 people gathered for the week-long course from across the Asia Pacific, with participants from Malaysia, Laos, Hong Kong, Bhutan, New Zealand and Sri Lanka. The biggest contingent came from India, where several states including Sikkim have adopted a policy of organic farming.

In Thailand many people are also making their own recipes instead of buying EM1. However EM1 is consistent and stable and it gives me the quantities I need. In Thailand it is very cheap compared with agricultural chemicals and we have produced delicious and high quality food, by using it. Our three cows forage for themselves but are also given our organic fruit as a treat and a supplementary feed of straw or grass mixed with rice meal, molasses and EM and they are in superb health. We also use EM1 in our ornamental fish pond with koi carp and they are healthy and it helps to manage the algae levels from getting out of hand.

Our site is located in Chanthaburi, a beautiful and mountainous province on Thailand???s southeast coast. The area has many unique local plants and animals and it used to be at the heart of the global spice trade, thanks to its rich forests where local varieties of pepper, cinnamon, cloves, neem and cardamom grew as well as the fabled agar-wood, which is revered by all major religions and produces a fragrant oil which is used in incense, perfume and medicine. We are growing all of these plants as part of our integrated forest farming project. Chanthaburi is one of the most fertile provinces of Thailand with high rainfall and abundant supplies of ground water and we welcome people from all over the world to visit us.

One of the highlights of the course was a demonstration plot of five rai (just under two acres) which provided a model for self-sufficiency in food production for a family. It included a house, rice paddies, fish ponds, vegetable plot, mango trees, forage trees, space for livestock and chickens in line with APNAN???s general ratio for sufficiency of house and livestock 10%, vegetables and fruit trees 30%, fish ponds 30%, rice field 30%.

Our own project at Faasai Resort and Spa also adopts this same integrated system, inspired not only by APNAN but the traditional farming experience of my husband Surin, who grew up in a village in the Northeast of Thailand. Our eco-resort, which covers just over four acres includes indigenous trees and herbs and an edible forest garden. We also have a nearby organic farm of around 15 acres that combines a small lake and stream and wetlands with indigenous agricultural practices and EM technology???. EM???1?? is used to make three major products - a solution of 5%% EM1, 5% molasses and 90% water which is used in fish ponds, animal husbandry and making bokashi compost, a solution of 5% EM1, 5% molasses, 5% rice whiskey, 5% white vinegar and 80% rinsed rice water, which is used as a foliar spray and disinfectant, and a solution of 5% EM1 and 5% molasses, mixed with water and herbs such as neem, lemongrass and galangal and fruit waste from pineapples, papaya, and mangosteen. All brews must be left for at least a week for the fermentation process to complete. We mix the herb brew with EM fermented rinse rice water and use it as a foliar spray and fertilizer, which repels insect pests, while encouraging beneficial insects such as ladybirds and spiders. It also protects against fungal diseases and generally improves plant health and vitality.

A bee at Faasai Resort