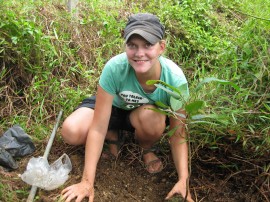 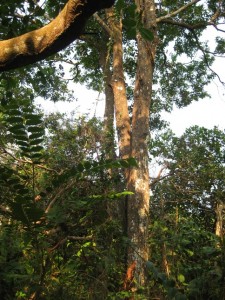 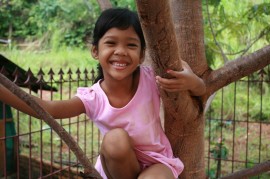 Our grand-daughter Cat climbing the copperpod 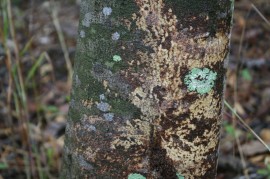 The bark of an agarwood tree 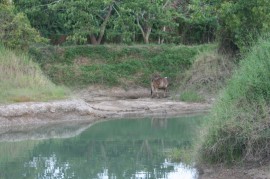 Why we need trees

All it takes is a small blip in the system to remind us of our dependence on nature.

When the April heat wave hit Thailand, the whole country was groaning. At our Bangkok apartment, the concrete walls were continuously warm to the touch from the sun and the throbbing air conditioners outside. As demand for electricity soared, brown-outs began and temperatures remained stubbornly high well into the night.

After five days in the city it was a relief to arrive back at Faasai and a pleasantly cool evening. But here too we were facing problems. The water at our lake had dropped more than four metres since the peak of the rainy season and some ponds were drying up. There were also ominous signs that our bore water supply at the resort was running low.

Fortunately in early May the rains came in Chanthaburi - to our relief and that of the myriads of tiny creatures that share this little piece of land with us.

The rest of the country wasn't so lucky though. Many provinces were declared disaster zones as high temperatures and late monsoon rains put the country on the verge of another crisis, barely six months after the flooding disaster of 2011.

Although floods and drought may seem like opposite problems, trees can help prevent both. A single large tree can absorb thousands of gallons of water which might otherwise end up in the storm water drains, while in the hot weather trees release mist into the atmosphere helping to stimulate the formation of clouds and rain. Perhaps this is why the drought broke sooner in our green province of Chanthaburi than in built-up urban centres such as Bangkok.

Trees also cool the environment, provide protection against gales and typhoons and filter out pollution from the air. Even on the hottest of days at the resort it is cool under the spreading branches of the bodhi tree, or in our little grove of agarwood, bananas and gingers. Our staff like to sit under the shade of the purging cassia and toothbrush tree by the gate; these lovely local trees don't only offer shade, but are part of nature's healing dispensary in Thailand. In the evenings a welcome coolness settles on the air as the hundreds of trees in our garden release oxygen into the night.

Trees also provide a haven for wild-life, refresh the human spirit, and are a valuable source of food, shelter, fodder and fuel. They also absorb carbon dioxide and release oxygen into the air.

The recent heat wave has increased my determination to plant and nurture our trees, so it was a lucky coincidence when on Saturday we visited the Chanthaburi fruit festival and were given free seedlings by the Princess Sirindhorn Foundation. They gave us eight trees, all forest giants - ton yang na (Dipterocapus alatus Roxb), ton takien (Dipterocarpaceae) and maka mong (Afzelia xylocarpa

Our grand-daughter Cat climbing the copperpod

The bark of an agarwood tree