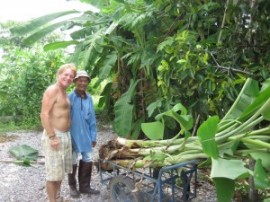 Kevin preparing to plant bananas with our gardener Lung It 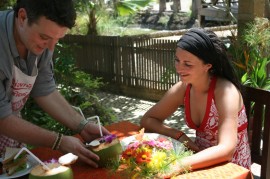 Chef Shane with Karis, a young volunteer from Scotland - trying out our new menu was one of her easier volunteer duties 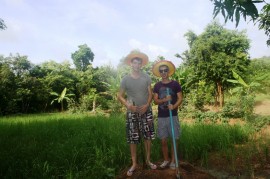 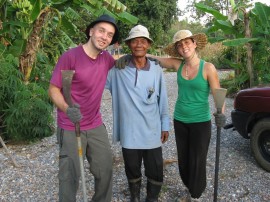 Martin and Maria with Lung It 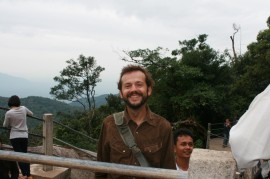 Kevin preparing to plant bananas with our gardener Lung It

Unlike Western countries, most farm work in Thailand is highly labour intensive; food is cultivated on small plots where most of the work is done by hand.

So, what better way to experience real Thailand, than to produce real food, working in the fields? Our first volunteer was Paullee, a 20 year old American advocate of the natural food movement who used to work in a food coop, but had never actually seen bananas growing on a tree. She asked if she could volunteer with us and gamely shoveled cow manure, mixed compost and planted papaya trees. I liked her a lot; she was smart and witty with a good heart. So I decided to invite more volunteers and posted a notice on a website called HelpX. Before long a young American couple contacted me - it was their honeymoon and they thought it would be nice to do something different. They were both rather small and delicate and she was still wearing her false eyelashes from the wedding. After half a day working with my staff, I received a plea for lighter work.″My back's killing me,″ he said.

″We work out at the gym,″ she mused, ″but it's nothing like this!″
I became more cautious about inviting volunteers, only accepting them after giving them strong warnings about the hard work and the tropical heat.
Even so, the hard work still came as a shock to some people, including Andi and Kevin Crockford, who were on their dream trip around the world. Andi captured their experience in a blog:

″The Thai sun at midday in April is brutal; I believe it was the first time in my life I have actually had sweat dripping from my nose.″
She vividly described the real or imagined dangers such as the local villagers (hunters), snakes and insects.

″Sitting or squatting on the ground made me an invader and a threat to many species of insects who called these weeds their home. We were constantly battling for position with centipedes, spiders, ants of varying sizes and assorted other creepy crawly things.″

If they can survive the hard work and tropical heat, all our volunteers feel a sense of pride in their achievements. And naturally it stimulates a profound respect for the Thai villagers, who labour all day for a daily wage worth far less than our room and board. In any case, who said working on an organic farm in Thailand would be easy.

Some volunteers, such as Martin and Maria, an energetic young couple from Argentina, really relished the tough work. After working for the required half day, they would ask for more things to do.Tomas from Spain, another indefatigable worker, turned hoeing into a form of meditation.

Although mainly they work in our gardens, if a volunteer has a special expertise we take advantage of it. Don built a mosaic and painted murals, Shane taught cooking, Miri from Germany demonstrated floral art, while Lauren and Cheryl taught our staff English and service skills. It is an exchange of knowledge - as in turn we teach Thai cooking, Thai arts and crafts, Thai language and Thai permaculture.

Our volunteers mainly fall into three categories - young people traveling the world on a tight budget, mid-lifers taking a break from their career and holidaymakers who want to do something out of the ordinary. Without exception they are adventurous and interesting and have a desire to help the world. We come to love them and often tears are shed on both sides when they leave.

The volunteer movement helps us to step outside the usual economic model in a small way. By providing something that is ″free″ there is mutual benefit and the chance to build lasting friendships. When Surin was a boy, his family were rice farmers and nobody paid for farm labour - they helped each other with the planting and the harvest. When his father caught fish, Surin would go from door to door and share the catch with the neighbours. What we are doing today is little different in substance, except that it is using modern technology to share and exchange.

Although the goods and services we exchange are free they are certainly not without value. I hope that Paullee comes back one day to try the papayas we planted together. They are now loaded with fruit and providing free som tum lunches for our staff and breakfasts for our guests.

Chef Shane with Karis, a young volunteer from Scotland - trying out our new menu was one of her easier volunteer duties

Martin and Maria with Lung It