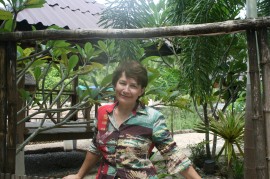 Ecotourism's role in helping to protect a small coastal community

Many people dream of having their own resort - a great lifestyle and financial independence. For me, the dream was more personal - a place to live and work with my Thai husband Surin.

In 2003 I heard of a mortgagee auction at a place called Kung Wiman. This rocky little bay with forest covered hills and a fishing village was beautiful, unspoiled and even its name meant paradise. We lost the bid in the auction but bought some other nearby land backing onto the hills.

The villagers still lived off the forest and the sea, as tourism had not yet arrived in this sleepy peninsula. They welcomed our enterprise, but my conscience troubled me - having found paradise, we needed to sustain it, not spoil it. My misgivings were outweighed by hopes and optimism and so we plunged ahead.

I wrote down our goals in a little notebook - ″Grace, harmony and natural beauty.″ Harmony with the local community and nature, beauty which draws on nature, and grace... we were there thanks to the grace of others; we too must be gracious and generous in return.

For us there were three aspects to sustaining paradise: how we developed the resort, how we promoted it and how we interacted with the local community. We kept it small, with lots of green space, encouraged biodiversity and conserved resources with solar energy, energy efficient buildings and recycling. We employed local people and supported their projects such as renovating their temple and I promoted it through the internet, targeting sites that promoted green tourism, We found there was a demand for what we offered and the travelers who sought us out were wonderful - sensitive, caring and interested.

Our guests seemed to pose no threat to paradise, but threats were coming from other quarters. Land was rapidly changing hands, new owners were blocking off traditional fishing areas, trees were being cut down and new buildings were going up.

On our boundary was a grand old ″brakok″ tree, otherwise known as Barking Deer Mango or Irvingia Malayana. The largest tree in the neighborhood, it was around 80 years old and home to hundreds of small animals, birds and bats which came to feast on the fruit, an edible nut something like an almond. Sadly, it was on the neighbor's side of the boundary and one day they cut it down.

I realized then the importance of private property for conservation and so In order to protect a small corner of paradise from development, we bought an area of wetlands, about half a kilometer from the resort.

A natural watershed, it was called White Water Lake but the land had been degraded, dug out for rice, shrimps and even landfill. We restored the lake and planted native and flowering trees and vetiver grasses to stabilise the banks and keep the water clean. We also planted a small orchard - although the soil was thin, we would build it up with compost and manure.

One of the worst effects of development, including tourist operations, is that it destroys natural ecosystems. Around here, one of the first thing new owners do is cut down trees and kill off the ″weeds″ with herbicide. In the despairing words of Pulitzer prize-winning ecologist E.O. Wilson - ″The natural world in the year 2001 is everywhere disappearing before our eyes - cut to pieces, mowed down, gobbled up, replaced by human artifacts.″ Despite the dangers of tourist development, he sees eco-tourism as one way to help the environment as it places an economic value on the protection of wildlife, habitat and areas of natural beauty. Indeed, that was a consideration for us - our little sanctuary would provide recreation, learning and food for our guests.

This local area has a unique ecosystem which includes fresh water springs and swamps, mangroves, salt water marshes and rock pools. This was long ago recognized by the King of Thailand who created a royal marine sanctuary in Kung Kraben Bay, next to Kung Wiman; one of only two in the Kingdom. Rare dugongs visit the bay to feed on the sea grasses which were planted as part of the project and the locals help to protect them as they are a potential tourist attraction in the future.

This region was once part of the spice trade with wild cloves, cinnamon, cardamom and peppers growing in the hills and mountains, along with many beautiful timber trees. Much biodiversity was lost when forests were cut down and replaced with fruit orchards and pepper plantations. Now even more is being lost as the orchards are being uprooted to make way for more profitable rubber plantations. By keeping wild pockets of bush on our land and encouraging the self-seeding of local trees and plants we are trying to preserve what we can. One tree we are growing is Agar Wood or Aquilaria, with aromatic oil that is used for incense, perfume and medicine. We have planted more than a thousand - not only a carbon sink but a way of preserving this rare and beautiful tree.

Our particular focus is growing food and encouraging biodiversity. Our gardening method is neither that of the agriculturalist nor the hunter-gatherer, but forest gardening which is traditional in Asia. With its many tiered layers and diversity of plants, it is highly productive and the rich diversity of plants, including herbs, vines and fruiting and flowering trees encourages a myriad of insects - a food source for birds, frogs, lizards, bats and other small creatures, which in turn help to manage pests.

To grow food we need to build healthy, living soil and this is one of our most arduous tasks, as we make compost and bio extracts to nourish the soil. Although the humble insects and microorganisms we are nurturing are treated with disdain by most people, E. O. Wilson points out that such tiny creatures are critical for our survival.

″The more species that live in an ecosystem, the higher its productivity and the greater its ability to withstand drought and other kinds of environmental stress. Since we rely on functioning ecosystems to cleanse our water, enrich our soil, and create the very air we breathe, biodiversity is clearly not something to discard carelessly.″

Just as markets created perverse and destructive incentives, they also create positive incentives such as the demand for eco-tourism from our guests. Guests' income helps to support the local shops and suppliers and creates employment and some make donations to support local community projects. We also accept volunteers who pay for their rooms with their labour. Our most recent, Lauren Holz, has been teaching English to our staff and local children.

In May we planted 20 forest trees at our lake on behalf of Dan Goodwin, one of our guests. We planted Monkey Jack - Artocarpus Lakoocha, Thai plum - Eugenia Cumini, Cinnamon, Bulletwood - Mimusops Elengi, Moon Tree - Diospyros Decandra, ″Pradu″ - Phyllocarpus Septentrionalis, Bombay Blackwood - Aglaia Odorata and Fish Tail Palm or Toddy Palm - Caryota Urens - all trees which can live to a considerable age and which provide medicine, fibre and food for humans and wildlife.

As a small boy, Surin was naked for most of the first five years of his life and at school he only had one threadbare pair of pants. There was no electricity in his village, no cars, not even a bicycle. One of his chores was to get the resin from the ″Yang Na″ - Dipterocarpus Alatus tree, which served as a torch to light their home. From the age of six, Surin caught frogs, lizards, birds, insects, snakes, rodents to help feed his family, even so, food sometimes ran out. Yet he describes his childhood as idyllic and feels sorry for today's kids who grow up in the impoverished environment of the city.

So far we have counted over a hundred species of birds at the resort or lake. Common species include drongo, barbets, coucals, cuckoos, bulbuls, sunbirds, lapwings, swallows, bee-eaters, egrets, water hens, ducks and hawks. Many fly between the resort and the lake which are only half a kilometer apart, so form a natural corridor.

I cannot say with confidence that we can save this paradise - after all White Water Lake is only about two metres above sea level, so the rising sea will turn the water brackish one day. But we are glad to play our small role in a social ecosystem - a global network of like-minded people who want to help make the world a better place.